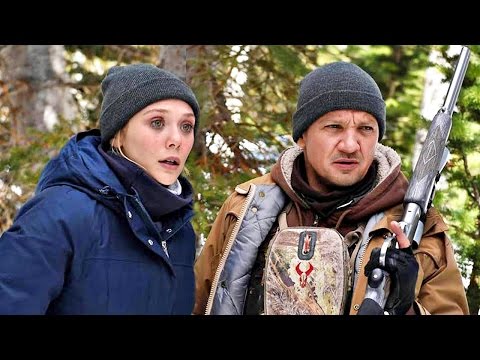 Taylor Sheridan, author of the screenplays for Sicario and the Oscar-nominated Hell or High Water, tries his hand at directing his own screenplay for the first time in the new film Wind River, which has been in limited release since August 4 but opened in central Arkansas this past weekend. Sheridan succeeds in putting together a beautifully shot, well-acted thriller with an effective and tense soundtrack and terse but effective dialogue, but one that left me with a disturbing feeling that something here was off.

Set in Wind River, a Shoshone and Arapaho reservation in Wyoming, the film begins with a teenaged Native American girl running barefoot across the icy winter landscape of the reservation at night. She stumbles and falls, then, gasping, she gets up and continues to run. We then cut to daylight, brilliant in the glare of the white snow. A predatory pack of wolves has surrounded a helpless flock of sheep who stand, surrounded and afraid. It is an unmistakable metaphor for the nighttime scene we have just witnessed, though the girl seems to have been more difficult prey for the predators than these sheep are. Suddenly a shot rings out, picking off one of the wolves. Dressed in white camouflage, Cory Lambert (Jeremy Renner), a U.S. Fish and Wildlife Service agent, steps out. His job, it seems, is to protect the innocent from the predators.

We soon see Cory picking up his son from his estranged Native American wife, telling her he has been called to the “rez” to take care of a mountain lion that has been attacking cattle. He will take his son to his grandfather’s while tracking the lion. But Cory doesn’t get far before he comes upon the body of the girl we saw running in the first scene. She has died when her lungs froze after running for miles while breathing in air at 20-below-zero temperatures. Cory recognizes her as a local girl named Natalie. He consults with the chief of the tribal police, Ben (a wry and cynical Graham Greene), and they contact the FBI, who send a new and inexperienced agent named Jane Banner (Elizabeth Olsen), who happened to be the closest agent to the scene, in Las Vegas. Jane arrives, as Ben says, “dressed for winter in Las Vegas,” and must be fitted out with appropriate gear for the harsh Wyoming winter by Cory’s ex-mother-in-law. She ends up wearing clothing that had belonged to Cory’s daughter, who, we learn, herself perished in the cold, under circumstances as suspicious as those that killed Natalie.

It being clear that Natalie must have been fleeing something threatening her life, Jane must begin an investigation into this suspicious death. Ben has very little in the way of resources, having only six officers available to police an area the size of the state of Rhode Island. This might clue us in to the fact that here, in this sparsely policed area, there are some who, as in the old westerns to which this film alludes, will disregard the social contract that makes civilization possible, or conversely will take the law into their own hands. But Jane, the embodiment of the law in this place, commandeers the services of the local Fish and Wildlife agent, and Cory assists her investigations with his knowledge of the area and his ability to track movements through the snow. Cory also steps in to take on the responsibility of talking to Natalie’s parents when Jane’s inexperience hampers her effectiveness. It turns out that Natalie and Cory’s own daughter were best friends, and Cory can most effectively empathize with Natalie’s father Martin (played by Gil Birmingham, who is as impressive here as he was in Sheridan’s Hell or High Water last year).

The investigation leads to a confrontation with Natalie’s drug-addled brother and his reprobate companions, and the discovery that the eighteen-year-old Natalie was involved with a much older member of the all-white security team at an area oil-drilling site, and ultimately to a climactic confrontation that is as intense as it is shocking. Nick Cave and Warren Ellis’s score reflects both the bleakness of the icy landscape and the intensity of the emotional pressure that builds to that climax, while Ben Richardson’s cinematography turns the frigid vastness of the landscape into a character in its own right, one that, without malice or cunning, will kill more surely than the predator wolves.

If there is a point at which the film seems to veer off course, it is not in the performances, which are uniformly strong. In addition to Greene and Birmingham, Renner is spot on as usual, managing to squeeze out a tear or two from his stoic façade for his daughter and all the women like her who are lost without a trace in this environment, and Olsen is sympathetic as the naïve rookie who learns what it means to be a warrior, emulating Natalie herself, played in a devastating flashback by Kelsey Asbille, who managed to run six miles through the frigid landscape before being felled by the cold rather than any human hand.

The film ends with a graphic revealing the sobering fact that there are no records kept of how many Native American women go missing each year. We can ponder what that means for some time—is it because so many are lost in hostile place like these? Or because society has dropped the ball so badly in its obligation to protect these people that they’ve even neglected to make them a statistic? There is something fitting in Jane’s character arc in the film that in the end she has become, like Natalie and Cory’s daughter, a warrior, but one that, at least this time, has not been defeated by the land or its predators.

But by the same token there is a part of Jane’s character that becomes hard to swallow. Much like Emily Blount’s character in Sheridan’s Sicario, she is a young naif who must be brutally introduced to the fact that, to deal with the lawless predators of society, she must leave behind her childish notions that we should follow rules, procedures, and laws. To deal with predators, you must become a predator. Which means she must become a man.

This is a disturbing notion in itself, but it is only underscored by the fact that, although the film makes a nod toward the missing Native American women and includes a woman protagonist, it’s not about the plight of the girls who were killed, but about the effect those deaths had on their fathers, and the fathers’ need for revenge. This becomes clear in the film’s disconcerting ending, which for spoiler’s sake I won’t reveal here but which, trust me, is all about a father’s revenge.

Add to this the fact that, although the victims in this film are Native Americans, and the crimes occur on a reservation, it’s the two white characters who wind up solving the case and bringing about “justice.” So what are we learning here? Women are too naïve and unrealistic to survive in a world where you need brutal male aggression to make things right. But Indians are too helpless, or too “primitive,” to solve their own problems, which must be resolved by…uh…those “primitive,” brutal white men—or white women who’ve learned how to be white men.

See what I mean? Something in this film just doesn’t sit right, even though it’s made extremely well. I’m giving it two Jacqueline Susanns for its themes, and half a Tennyson for its quality.