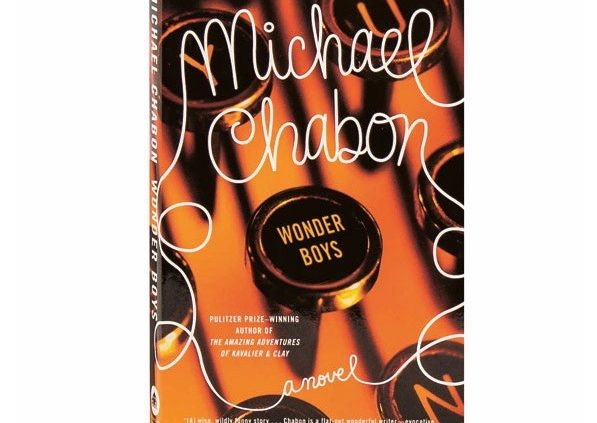 A lot of readers know Michael Chabon mainly for his epic 2001 Pulitzer-Prize tour de force The Amazing Adventures of Kavalier and Clay, the kind of book that gets permanently in your head and that you realize if it were the only book he had ever written Chabon would be a Salinger-level genius. But the fact is it was the earlier Wonder Boys that first put Chabon on the literary map after his promising first novel The Mysteries of Pittsburgh (1988). And this was in part because of the highly successful film version of the book starring Michael Douglas, Robert Downey, Jr., and Tobey Maguire and directed by L.A. Confidential director Curtis Hanson. But more than simply the basis of a hit movie or the precursor of a great book, Wonder Boys is an excellent novel in its own right, and a book that should particularly appeal to writers.

The novel’s protagonist, Grady Tripp, is a creative writing professor and fiction writer at a small Pittsburgh liberal arts institution, whose Korean-Jewish (third) wife has walked out on him on the eve of an important annual conference hosted by his school’s English department. Known as “WordFest,” the conference brings together writers and publishers from around the country for a weekend of social and professional interaction, including a John Updike-like major speaker referred to only as “Q.” Among the participants in the conference will be Grady’s editor and former college buddy Terry Crabtree, who’s been waiting for a finished novel from Grady for years.

There are three significant conflicts for our poor protagonist as the novel spans the WordFest weekend: Turns out his wife has left him because he’s been having an affair with Sara Gaskell, the chancellor of the college who also happens to be married to the head of Grady’s department. Grady has some vague thoughts of getting back with his wife, and even endures a bizarre Seder at her parents’ house amid his other conference responsibilities, but since he’s just found out that Sara is pregnant with his child, he’s pretty sure that’s not going to work out.

Grady’s second conflict is trying to convince Crabtree that he’s about to finish his book. After an acclaimed and promising first novel called The Land Downstairs, Grady has been working for seven years on a manuscript called “WonderBoys,” a manuscript that has now run to 2,611 pages and shows no sign of ever concluding. Keeping in mind that Wonder Boys is Chabon’s second novel, and that it came out seven years after his own successful first novel The Mysteries of Pittsburgh, it’s no stretch to suspect that Chabon is projecting some of his own writer’s anxieties onto his protagonist. But that becomes pretty obvious when one finds that Chabon himself worked for those seven years on a novel called Fountain City, about building a perfect baseball stadium in Florida, before he abandoned that novel and fairly quickly wrote this one. (Grady is also based on the well-known Pittsburgh professor and former teacher of Chabon’s named Chuck Kinder, who worked for decades on a book about his own relationship with author Raymond Carver, and whose manuscript grew to a behemoth 3,000 pages).

Finally, Grady also finds himself in a darkly comic plot involving one of his students, a certain James Leer, a young writer who arouses conflicting emotions of sympathy, befuddlement, and jealousy in the older man. James has written a novel that shows great promise and solid talent, and that he’s actually finished with far fewer than 2,000 pages. And it’s a novel that Crabtree seems more interested in than Grady’s interminable tome. Crabtree’s feelings for James are less conflicted and more carnal in nature. But James ends up attending a WordFest party at Sara’s house, shooting her dog and brazenly stealing Marylyn Monroe’s jacket from Sara’s husband’s Joe DiMaggio memorabilia collection.

This is a novel that is all about writers: young writers, old writers, successful writers, failed writers who’ve gone over to the dark side of publishing, blocked writers who are just trying to find a way out of the corner they’ve written themselves into. And therefore it’s also a book for writers. If you writers don’t see yourself in one of the characters, you’ll likely see yourself in another.

But if that were the only thing about Wonder Boys that was valuable, you probably needn’t read the book at all, but just go find the movie and watch it. And while that would certainly not be time wasted, you’d miss the language of the book. Chabon is one of the great current masters of the English language, so it you just watch the movie, you’re going to miss sentences like this:

Although it was only nine o’clock he had already gone once around the pharmacological wheel to which he’d strapped himself for the evening, stolen a tuba, and offended a transvestite; and now his companions were beginning, with delight and aplomb, to barf. It was definitely a Crabtree kind of night.

It’s funny, it’s playful, it has an infectious rhythm to it, and it has that ironic and unexpected punch at the end that not only rounds out the passage satisfactorily, but for good measure helps construct the character of Terry Crabtree without any obvious kind of exposition like “Terry Crabtree liked to party. Often he took things too far.” In these two sentences is a seminar in how to write modern American prose.

As for Grady himself, Chabon calls him

an elephantine piece of machinery… all vacuum tubes and gear work with a plain old analog dial of a face, such a dented, gas-guzzling old Galaxie 500 of a man.

Is there a more effective way of describing someone completely out of step with contemporary society, a society determined by new technology, than to describe him as if he himself is a relic of the Web-less past?

Or consider this picture of Grady’s impregnated love interest Sara:

She imprisoned her glorious hair within its scaffolding of pins, painted a thin copper line across her lips for makeup, and aside from her wedding ring the only jewelry she generally wore was a pair of half-moon reading glasses tied around her neck with a length of athletic shoestring. Undressing her was an act of recklessness, a kind of vandalism, like releasing a zoo full of animals, or blowing up a dam.

The conceit of Sara’s hair as a living thing that needed to be tamed and imprisoned, and the thought of undressing her compared with the release of zoo animals, are images almost metaphysical in their imaginativeness, but they effectively evoke a woman with a wild streak effectively restricted by the constraints of her position as chancellor. Again, Chabon’s language is fanciful and entertaining in itself, but serves the larger purpose of establishing character.

Wonder Boys is a funny, entertaining book, whimsically over the top in its plot but all too real in its characterization, that ultimately deals with poignant questions of squandered potential, self-destructive behavior, the promise of youth and the possibility of redemption. Like all of Michael Chabon’s books, it’s a comic novel worthy of a serious read.

Named a finalist for the INDIE award for best Mystery novel of the year: