Casablanca today is a sprawling, teeming metropolitan area of some nine million people. While it doesn’t approach the huge megalopolises of Lagos or Cairo, it is still among the largest cities in Africa, a far cry from the quaint old town depicted in the famous film of the same name. That movie was filmed in the back lots of Warner Brothers studios, with no one involved in the production ever setting foot in the actual city. But in a bizarre example of life imitating art, there is, just off the harbor in the modern city, not far from the world-famous Hassan II Mosque with its 600-foot minaret, a little white building with the name “Rick’s Café.”

Your first impression, like mine, is probably that this is some purely kitschy tourist trap for Americans and other film buffs whose only context for the city is the film. I was surprised when, upon visiting the city for the first time this week, our Moroccan friend Amina wanted to go with us to Rick’s Café. Apparently, the place has a reputation for excellent food with an American accent, even among Casablanca’s Moroccan residents. And they will visit the place for a fancy meal out if they are willing to pay American prices.

This is not to say that the restaurant does not attract large numbers of Americans or Europeans wishing for a little bit of connection to the classic film. Pretty much everybody who came in sat briefly at the piano for a Facebook or Instagram shot at Sam’s keyboard. Although Monday was not a night when they had live music, it was still something of a thrill, even if the link with Bergman and Bogie is purely in the imagination. Turns out to be true that everybody comes to Rick’s. 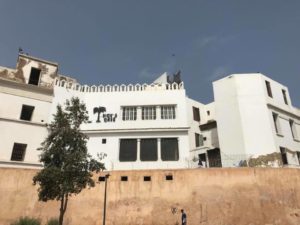 They come because the classic 1942 film is considered by many to be the best American film ever made. On the original AFI list of the 100 greatest American films of the twentieth century, Casablancawas ranked #2, just behind Citizen Kane and just ahead of The Godfather and GoneWith the Wind. But Casablanca is a film that at 75, though it may be getting a little long in the tooth when weighed against current technical aspects of filmmaking, remains timeless as a drama and a romance, and retains unshakably the fervent sentimental attachment of its devotees.

If you are a fan of the movie, you probably know that it was something of a surprise success. Ingrid Bergman was not the first choice to play Ilsa Lund, but got the part only after Hedy Lamarr turned it down—and after she herself was turned down for the lead in For Whom theBellTolls, which promised to be a much bigger movie (eventually, of course, she got that role too, and was nominated for an Oscar for it). Warner Brothers thought of Casablancaas just another movie, one of fifty or so that the studio cranked out in 1942. American playwrights Murray Burnett and Joan Alison had writtenan unproduced play called Everybody Comes to Rick’s in 1940. After Pearl Harbor and the American entry into World War II in December 1941, the studio bought the rights to Burnett and Alison’s pro-French resistance, anti-Nazi play in order to produce what they thought of as essentially a propaganda flick to help the war effort. 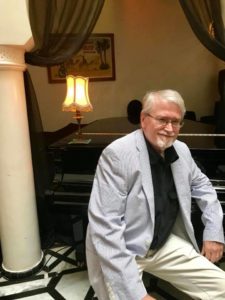 Screenwriters Howard Koch and the twins Julius and Philip Epstein rewrote the screenplay many times as filming progressed, so that none of the actors knew how the film would end—because the writers themselves did not know. Bergman had no idea until the last scene was filmed whether her Ilsa was going to end up with her husband, the Czech resistance leader Viktor Lazlo (Paul Henreid), or her former lover, the cynical American café owner Rick Blaine (Humphrey Bogart). Further, the movie was rushed into production to be released on limited screens on November 26, 1942, to coincide with the Allied invasion of North Africa, and then had its wide release on January 23, 1943, at the same time that allied leaders, including President Roosevelt, attended a summit meeting in Casablanca itself.

And yet despite all of these apparent barriers, the film came together beautifully: Even with its early release date, it was considered eligible for the Academy Awards for 1943, and was nominated for eight of them, taking home the Oscars for Best Picture, Best Director for Michael Curtiz, and Best Screenplay for the one finally forged by Koch and the Epstein brothers, a script that contains more quotable lines than any other in movie history. Bergman’s performance in the end was probably enhanced by the fact that she didn’t know who she would end up with, since it was easy for her to appear undecided and drawn both ways. Surprisingly, she was not nominated for an Oscar—perhaps because she was nominated for For Whom the Bell Tolls, and it wouldn’t do to have her competing against herself. More surprisingly, Claude Rains, who very nearly steals the movie in his role as the unscrupulous, lecherous, and charming Vichy police officer Louis Renault(“I’m shocked, shocked to find that gambling is going on in here!”) did not win the Oscar for his role. The Best Supporting Actor award went to Charles Coburn for the film The More the Merrier—a decision that seems questionable in hindsight. Most shocking of all is Bogart’s loss of the Best Actor Oscar to Paul Lukas for Watch on the Rhine. What were they thinking, we may ask today. Of all Bogart’s roles, even his Oscar-winning turn in The African Queen, the role of Rick is the one that cemented him as a major star, and showed he could play the romantic lead and not just a gangster or tough private eye. The cynical Rick, whose hard-shell cynicism masks a broken heart and a disappointed idealism, was a hero for the time and, though his conversion may seem sentimental or melodramatic to some film snobs, he still resonates with the majority of audiences today.

What is it that makes Casablancaso beloved? Partly it is the challenge that every major character must confront in the film: Faced with a choice between taking a stand against tyranny and oppression and giving in to it, we see Lazlo’s bold and decisive moves, thrilling at the famous scene where he rouses the entire nightclub to sing the Marseillaise and drown out the German singing of the Nazi interlopers, symbolically carrying on the resistance through music. We see Rick ultimately choosing the noblest course of action—restored to his idealism by his love for Ilsa, he makes the choice to let her go for the good of the cause, and to join the resistance himself. In a theme that goes back as far as the Middle Ages, love ennobles him and awakens him to noble action. “It’s still the same old story,” the haunting words of the song tell us. “A fight for love and glory. A case of do or die.” Even Renault ultimately makes the right choice, a more personal one for him, choosing Rick, whom he likes, over the Nazi Major Strasser, whom he detests, and is off at the end to join the resistance with Rick, “the beginning of a beautiful friendship.”

It’s the characters that we relate to in Casablanca. Even the minor characters, from Peter Lorre as black-market peddler of the “letters of transit,” to Sydney Greenstreet as Rick’s fellow restauranteur and competitor Ferrari, to Dooley Wilson as Rick’s piano playing sidekick Sam in a role that doesn’t make you cringe the way many African American roles do in Hollywood films of the “golden” era. All of the characters are rounded to a remarkable degree. The vast majority of the cast of the film was made up of actors who had left countries that had been taken by the Nazis (Henreid himself was on Hitler’s wanted list). And so they were quite believable as refugees waiting in Casablanca for a chance to flee to sanctuary in a free country.

Thus Casablanca has often been seen as a kind of allegory, in which Rick represents the United States, refusing to take part in the conflict until finally forced to make a decision. In the December 1941 of the film, he throws his lot in with the free French, whom Louis is off to join. He also supports the resistance fighters throughout enslaved Europe, represented by the Czech Lazlo (Czech resistance fighters had assassinated Hitler’s top henchman Reinhard Heydrich on June 4, 1942). Rick, like an America mired in the isolationism preached by Charles Lindbergh and his facist-admiring “America First” movement, ultimately must wake up and get into the struggle to help those refugees. It does sound like the film remains relevant, doesn’t it? It has even been suggested that the city’s name—Casablanca, which means “white house”—is an allusion to that other White House, and the inhabitant of it, who needs to shed isolationism and help refugees fleeing danger or persecution.

If you come to Casablanca, eat at Rick’s. If you watch Casablanca, watch it with modern eyes, which may see something very contemporary. Happy Fourth of July. Here’s looking at you, kid.