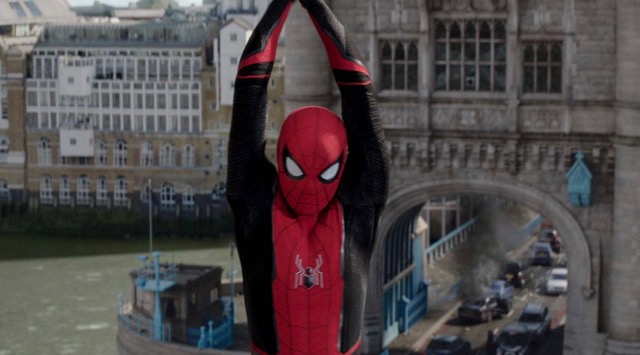 Jake Gyllenhaal was at one time tapped to replace Tobey Maguire in Sam Raimi’s Spider-Man 2 because Maguire’s health problems threatened to scuttle the film, and Raimi wanted someone who resembled Maguire to take over the part. But Maguire recovered to star in that blockbuster and Raimi’s third installment as well, so Gyllenhaal was out. Of course, his turn in Brokeback Mountain a few years later solidified his star status, and he has often joked about being mistaken for Maguire by cab drivers who call him “Spider-Man” ever since. Gyllenhaal’s casting 15 years later as Quentin Beck, a.k.a. new superhero “Mysterio,” in John Watts’ sequel to 2017’s Spider-Man: Homecoming in this third film iteration of Marvel’s most popular hero in the past two decades, is ironic at the very least, partly as an in-joke and almost certainly also as an aspect of this film’s post-modern self-referentiality.

Another more significant example of that self-referentiality is the film’s surprising twist—and I’m trying my best to limit the “spoiler” aspects of this revelation—that what seems to be a huge threat to human civilization (what the movie labels an “Avengers-level” threat) is in fact an illusion generated by…wait for it…technologically projected computer-generated special effects. Just like in the movie itself. Get it? So, the characters in the film are reacting in the same way that the audience in the theater is reacting, and to the same CGI effects. Except that the characters in the film believe that what they are seeing is real, while the members of the audience are just willingly suspending their disbelief. It’s an interesting comment about the trustworthiness of cinematic truth. At the same time it’s a bold representation of the ability of powerful elements in society to foist falsehoods on the public through other media, and a cautionary tale regarding how much we ought to believe.

In terms of the Marvel Cinematic Universe, Spider-Man: Far From Home is the “reset” button after the climactic events of Avengers: Endgame, a button pressed by Marvel even while Avengers is still in theaters. There is an elegiac feel to the opening of Spider-Man: Far From Home, as the strains of Whitney Huston’s “I Will Always Love You” stream over a montage of images of Iron Man, Captain America, Black Widow and Vision, all characters lost at the end of Endgame. One can’t help but feel that the montage is also a farewell to Stan Lee, Spider-Man’s creator, who died late last year. The overwhelming impression is that this is a turning point for the Marvel franchise. While Black Widow and Vision have been relatively minor stars in that universe, the elimination of Iron Man and Captain America leaves a huge void at the top of the Avengers food chain.

That opening montage ultimately turns out to be a video production created for a student news broadcast at Peter Parker’s high school, during which we are also given the necessary exposition on exactly how the folks at the school were affected by that inconvenient five-year “blip” that occurred between Thanos’s infamous finger-snap at the end of Avengers: Infinity War that snuffed out half of all life in the universe, and Tony Stark’s sacrificial finger-snap at the end of Endgame, which restored those lost lives. At least at this high school, things are back to normal, though the blipped generation are back in school with kids who used to be five years behind them. One of those, of course is Peter Parker, a.k.a. Spider-Man.

Sure, this pretty much epically downplays the disastrous effects such a five-year blip must have had on human society, but we’re turning that page here and starting fresh, so let’s put it behind us. And in a way it does all fit: With this film we’ve left the lofty galactic “Avengers-level” apocalypses for the adolescent angst of a high-school kid, Peter Parker (played again by British 20-something Tom Holland, who plays a pretty convincing 16-year old).

And all Peter Parker wants to be is a friendly neighborhood Spider-Man—he’s got no interest in cosmic-level heroism. What he really wants to do is just put his suit away for a while and join his classmates on their school trip to Europe over the summer and to try to get the opportunity to tell his sardonic friend M.J. (former Disney-channel star Zendaya) what a big crush he has on her—and wants to do it on the top of the Eifel Tower.

Accordingly, Peter refuses to respond to attempts by ex-S.H.I.E.L.D director Nick Fury (Samuel L. Jackson) to contact him, ghosting the irascible Fury and ignoring, as well, his former mentor Tony Stark’s best friend Happy Hogan (Jon Favreau), both of whom are trying to convince him to step into Iron Man’s shoes and assume a leadership role in the new post-Avenger superhero world. Of course, Peter is also creeped out by Hogan’s fairly obvious attraction to his Aunt May (played by Marissa Tomei—so who can blame Hogan? But I digress…), and he just wants to be a normal kid and hang with his classmates, especially M.J. and his best friend Ned (Jacob Batalon). He deliberately fails to pack his Spider-Man uniform—but May packs it for him anyway.

Turns out his talents are needed, and he can’t really escape Fury, or Hogan either, because giant interdimensional monsters called Elementals (because they are basically embodiments of the four original “elements”—earth, air, fire, and water—which is bad science but, as we know, there are a lot of gullible people nowadays who believe in bad science. Anyway, it’s suspicious, which ought to be a clue…but I digress again). Nick Fury recruits Peter Parker and is seconded by Hogan, who gives Peter a scientifically super-advanced pair of glasses that connect him to all of Iron Man’s technology, a symbol of Tony Stark’s deliberate choice of Peter to succeed him as leader of the superhero lineup. As such, Peter is dragged into the fight against the Elementals, teaming up with new superhero Quentin Beck/Mysterio (Gyllenhaal), who, Fury tells him, has followed the Elementals into this world from a parallel earth in another dimension. Fans of the Spider-Man comic world will already know what to expect from Mysterio. For all others, it will be a surprise as I eschew the spoiler urge.

The real conflict in Spider-Man: Far From Home is the one within Peter himself, between his desire to be a normal teenager and the pressure to take on the hero’s mantle—a mantle he feels inadequately prepared to don. And like any 16-year-old, he makes some bad choices as he suffers the age-appropriate angst. But this is a moment he was made for: For Marvel, Spider-Man has always been the standard bearer for the franchise—the most popular and most relatable of all the heroes on their roster. Despite the more formidable powers of a Captain Marvel, a Black Panther or a Dr. Strange, it’s the more modest and more sympathetic Spidey whom readers have always gravitated toward most strongly. It makes sense for the webslinger to be the cornerstone of the new Marvel world order.

In this film, things work themselves out against a great backdrop of scenes from Venice, Prague and London, all of which sustain Elemental damage and none of which is explored beyond a surface taste (there is a hilarious scene, for anyone who’s been to Prague, of Peter and M.J. walking on a romantic Charles Bridge, which they have completely to themselves in a bit of absurd fantasy, rather than more realistically sharing it with 10,000 other summer tourists). Holland, Zendaya and Batalon are relatable as teenaged characters, and Gyllenhaal is likably avuncular in his relationship with Peter, at least at first. Jackson and Tomei are delightfully Jacksonish and Tomei-like. And yes, there is still hope for that romantic connection between Peter and M.J.

You may remember that Avengers: Endgame gave you no reward when you waited like a fool until the end of the credits. Well, this time you really do have to wait, and you’ll get a surprise. It is, by the way, another self-reflexive surprise, and another throwback to the Tobey Maguire/Sam Raimi Spider-Man era, so you’re not going to want to miss it. Overall, this film is an all-around good time. Three Tennysons for this one.

Hole in the Wall Cafe
Scroll to top